Back when i was back in the VS days, being fat, over-weight was never cool. No cool kids wanted to mix around with me. Having CHOIR as a CCA definitely did not help and here comes the verbal abuse of “choir gay boy”, “fat lard” and  “ah pui“(something tt i love to hear now).
I am the most fortunate ah pui that i’ve ever known. I made friends with the cool kids from track and field, made friends with the basketball team. My best friend was the one who passed me half of his recess sandwich every single chinese lesson, let me copied the chinese spelling, taught me how to court my first ever girlfriend. I still remember the taste of the peanut butter and jam sandwich. haha..
As little as i mentioned, these meant alot to me. And for that very reason, till this day, these VS boys are my bestest- best best inner circle i’ve ever had in my life.
One particular person that has motivated me so much through his sporting achievement was none other than my best friend, Gary.
He once told me “why dont you go and do some sports and be the best in it and one day singapore will pay us to travel together, to play and to compete?”. well, at the point in time, im a rockstar. who cares about doing sports right? And to be honest, at that point in time, he wasnt the very best the country had to offer. He was constantly playing second fiddle and although he went for sea games, commonwealth games, asia games, he was never doing the event he wanted the most. the 100m sprint. He was there for the 4x 100m. Even during these games, he always remembered me and he will always trade his jersey with the japanese team, so that i could have a piece of something to remember.
Over the years, family and friends have battled the frustration with him. Sometimes, the verbal abuse coming from papers or from others stating his incompetence or for mistakes such as the dropping of baton earlier this year. so to hell to of you pundits. _|_
This season is special, it is one of the few times, Gary was sent to sea games for 100m. Some of us felt this was the season he could do something, something wonderful.
Yesterday, was his SEA games event. the 100m sprint to determine who is the fastest man in south east asia.
During the heats, he (no. 199) came in 2nd and from the running form, i knew something great was about to happen. I was very very excited and i msged him. Deep down, i really wanted him to do something special. To surpass himself and to surpass the national record. I prayed. I hoped.
Later in the evening, he did the country proud and he did it was style by doing a new personal best of 10.46s to clinch Silver Medal for Singapore. 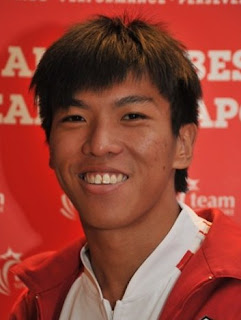 this is my best friend Gary Yeo.
Someday, i hope that i will be able to put on the the red and white that u have donned so often, to be sent to races to make my friends, family and country proud.
watch me developed as i have watched you.
I will be there.
thanks to you.
One more thing to do before u ever retire. Crash that national record.