Its been years since sly became my bro.
Its been years since sly and i said “lets do a song together!”, which we perceptually made no effort to make it come true.
Its been years since we actually did something together.. may it be to catch a movie or to play some games.. Its really been a while…
Bros are like this. U may not see them regularly, but we always have each other’s interest in our heart, we have each other’s back. This is the unspoken bro code. The rock and roll way.
So even when its been more than a year since we met, everything just felt like it was yesterday.
Its funny how this collaboration started. Initially, I wrote this song for him a while back but now i realised that it is more likely that this song was actually meant for me. So i re-arranged it but i lacked a guitar solo and figured that who else would write a better solo for this song other than my bro, sly. The song is called “Baby”.
Thanks to 2 x kopi, 1 x kopi-o, 2x teh-si, 1x teh tarik, im able to be awake till now. Go damn gonna die soon. But its all worth it for a night w my bro

-consperm-
As we were recording, we had our jokes, our usual laughs. We jeered each other when we make a mistake during recording and we traded composition tips. We just refuse to grow up. Glad to have a bro like him. “Two heads are better than one” thats what we always say.
Am i glad that we FINALLY did finish a piece of music together. Including recording of vocals and mixing. Phew**
Let me grab some sleep before i share the music w everyone ok! Its gonna be a blast!! I promise. Haha.. Oh oh! This is the first time im leaving his house smoke-free!! Awesome. Hahahaha..
Here a pic of my awesome bro at work 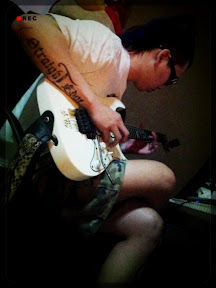