Its been a long time since i hit the beach to enjoy the sun, sand and games… Let alone mention to have the awesome company of my sports science course mates. How else would sports students spend some legendary time together right?

It was a very liberating feeling to put aside all assignments, essays, reports, exams and our personal work to sweat it out through fun filled games.

Often the issue w such a day is the lack of photos as everyone is fully participating in all activities and i guess that is all that matters.the mental image we all have will be for us to keep, to remind ourselves to “work hard, play hard” to have a “balanced work-life” and to give each other a very pleasant experience.. =]

It was a pity that not everyone managed to turn up for this particular outing, however, we have new additional in put from the other cohort, which in my own opinion is very important as it serves to prove that we have an open mind. Adding new dynamics, breaking out of our usual comfort zone is the challenge we all have to live up to, if we wanna survive in this society. So. Thumbs up to everyone. Kudos.

And here comes the pictures everyone’s been waiting for!!

Beautiful clear sky! Giving us a little too much heat and sun… Haha! 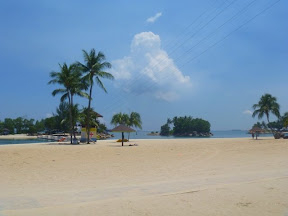 I buried my classmates shoes while he was in the toilet! Awesome… Haha. Treasure hunting for your own shoes is exciting right gary? 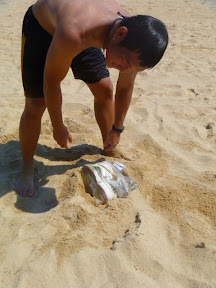 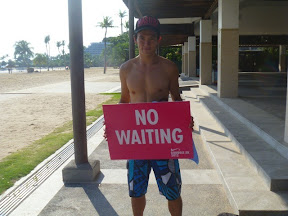 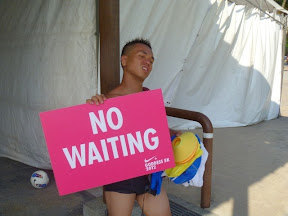 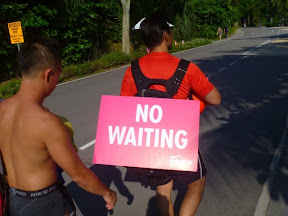 Some of the peeps after we showered! 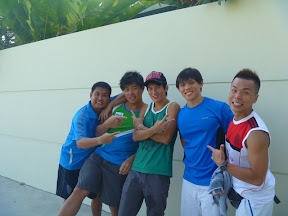 Cant wait for the next sentosa beach party!! Heehee.. But till then, i needa work hard-er-er-er…. Hahaha

prepared and written by Zac Leow

Alot of people do not realise why endurance runners are so different from “normal” people. Why they seem to be this calmness in them and why do they go through all these suffering when they could have just spend time relaxing.

One theory is that When u are out on a long run, u are out alone. It is just u and urself. U and ur problems, u and ur innermost demons. Its either u solve the crap or u get eaten up from within. It is a battle of survival. It is a battle Of physical endurance as well as mental endurance. Every step is a battle against urself. Every step could be hell or it could be the happiest moment of ur life. when i doing my race in japan, i was so overwhelmed with emotions, i started crying while racing.

The other view is based on the fact that Physical suffering is nothing compared to the sufferings felt from the heart. There are neither bandaids for the broken hearts nor medications for speedy recovery. There is no date line when one will ever start to feel better and let alone being fully recovered. To make things worse, no one knows when the “relapse” might hit the victim. Thats why, in my personal point of view, endurance athletes are great masters of escape. Endurance athletes escape into the trails only to create so much pain to their physical body that everything else seems insignificant. Endurance athletes run fast.. To escape..

No matter how you look at it, endurance athletes definitely burn more energy as compared to other athletes and in lay man terms they are often considered as “too tired to get angry”.

With all these in mind, i shall continue to run.. To run my hearts out.. To hopefully, one day i can be alright soon and defeat the demon within..

It all started 27 years ago when my mother went to the temple to pray for a baby boy despite her almost being 40 years old. The gentle wife prayed “god, please let me bear my husband a son. I will take up all responsibility, even if it means that it will bring me poor health.”
God heard her prayed and granted her wish, including bestowing poor health upon her.

My heroine, my mother, went through numerous cancer events, none of it having the odds in her favor. All of it was discovered in the late stages of cancer.. But yet she took up every single medication possible and fought through the chemotherapy, the radiation therapy. She fought through every single day of her life while taking care of me.

I have never been able to be appreciative of everything she has done for me till now that i am older. I was such an ass. I was never filial enough. I put my girlfriend in front of her. But yet it is her who stayed by my side and it is the pretty young ladies that left my life.
I will not Let her be the second fiddle in my life anymore.

Just a while bck, my mum felt lumps at her abdominal area. This was fucking bad news to my ears. I prayed hard that this is not what it may seem to be yet again, cancer. After medications and diagnostics, it has been confirmed that my beautiful mum is well and healthy. Praise the lord.

I never knew how much an impact my mum was to me till my one of my classmates told me “bro, u are just like ur mum. A warrior, a fighter that never gives up. Determined and focus. Never giving up on life” thats when i realised how true it is. Am i glad i took after my mum.

Mummy. I love you. May god bless u. <3 Am i glad i realised all these before its too late. Love ya!!
Zac Leow
peace
😀

2002, was the year SRJC last went into round 2 for the A division Basketball. In fact, that was the only few times in SRJC’s history that the basketball team had qualified for round 2 in ANY sport.
It has been my honor to be able to have a bunch of great team mates that have allowed me to participate and challenge others in the A division. Till today, i still have such fond memories.
The loses were tough and the victories was nothing but sweet.
But most importantly, the memories are here forever.
Making me smile whenever i think about our glorious past.
It was no easy feat.
It was tough work.
Let’s be honest about the situation. We had our fair share of fights with the opponents as well as within the team. In fact, some of us do not even see each other eye to eye. So this was when Ms Rivera invited Ms Ortega to conduct a sports psychology session for us, to motivate us and to try to gel us as a team.
During the session, we were asked what was our goal as a team and how we will move on from there. so in the end, my captain said “if we have to play, we might as well be the champion!”
everyone giggled. who was in the right mind to think that they can win HCI or RI or SAJC (who was the champion then)?
Ms Ortega went “Very good. so now thats the target and we will move on as a team!”
We were a little stunned by the reaction but at the same time it really hit us hard.
WHY CANT WE BE CHAMPIONS?
and so, we signed our names on a mahjong paper and we focused ourselves towards a common goal. Regardless of what personal issues we have against one another, we will put it aside on court and we will work hard for each other to bring home VICTORY.

Such good memories.
Such good times.
Such sweet victories.

Will i be successful??
It will totally be dependent on this series.

I think back at all the trainings we have been through.
All the injuries
All the pain
All the crams
All the suffering
And this is all going to pay off in a series of basketball game.
It shall all be justified.

Guys, i urge you not to conserve any strength,
not to hide your talents and
not to be shy of being yourself.

Together, we will make things happen.
So long as we believe we can.
and
Coach believes YOU CAN.

Great moments.. are born from great opportunities
thats what have here, right here, right now.
thats what u have earned.
to be here to prove your worth.
If we played the any top teams ten times, they might win 9.
but, not in any games.
Not this A div.
for this A div, we will hunt them
for this A div, we stay with them
for this A div, we shut them down. BECAUSE WE CAN
for this A div, we are the greatest basketball team in the world.
You were born to be basketball players.
everyone of u.
and you were meant to be here today, to play in the A div.
this is your time
a new era is about to begin.
the past is over. let us not be bonded by it.
i am sick of how people say we will never win.
i am sick of people not giving a damn about us.
SCREW IT.
I know you are much better than this.
THIS IS YOUR TIME.
GIVE ME 100%
GIVE YOUR TEAM MATES 100%.
THIS IS YOUR TIME.
NOW GO OUT AND WIN THIS DAMN A DIVISION
Only stop when the final whistle goes…
its all or nothing.
miss playing w my bros! =(

As many would have already known, i left singapore for tokyo on 17 february 2012 to compete in the Tokyo Marathon 2012 on 26th February 2012. It was a well calculated time to depart, giving myself 7 days to acclimatize to the much colder and drier conditions in tokyo. Lets not disregard the effects of radiations as well.

My tappering began in singapore and it followed through in tokyo till the actual race day.

so here are some pictures from my fantastic trip back ‘home’, the land of the rising sun, the place that keeps me motivated and sane every single day, Japan.

I am really glad i managed to break the goal set out by myself despite whatever nonsense my prof has told me. Claiming that it is impossible to go below 3:30 at this race for my standards..

So i shall continue to train hard, to race well.

Disciplined I shall
Motivated I’ll always be
Doing my very best, I will ever be.

Till the next race. Cya peeps and god bless =)