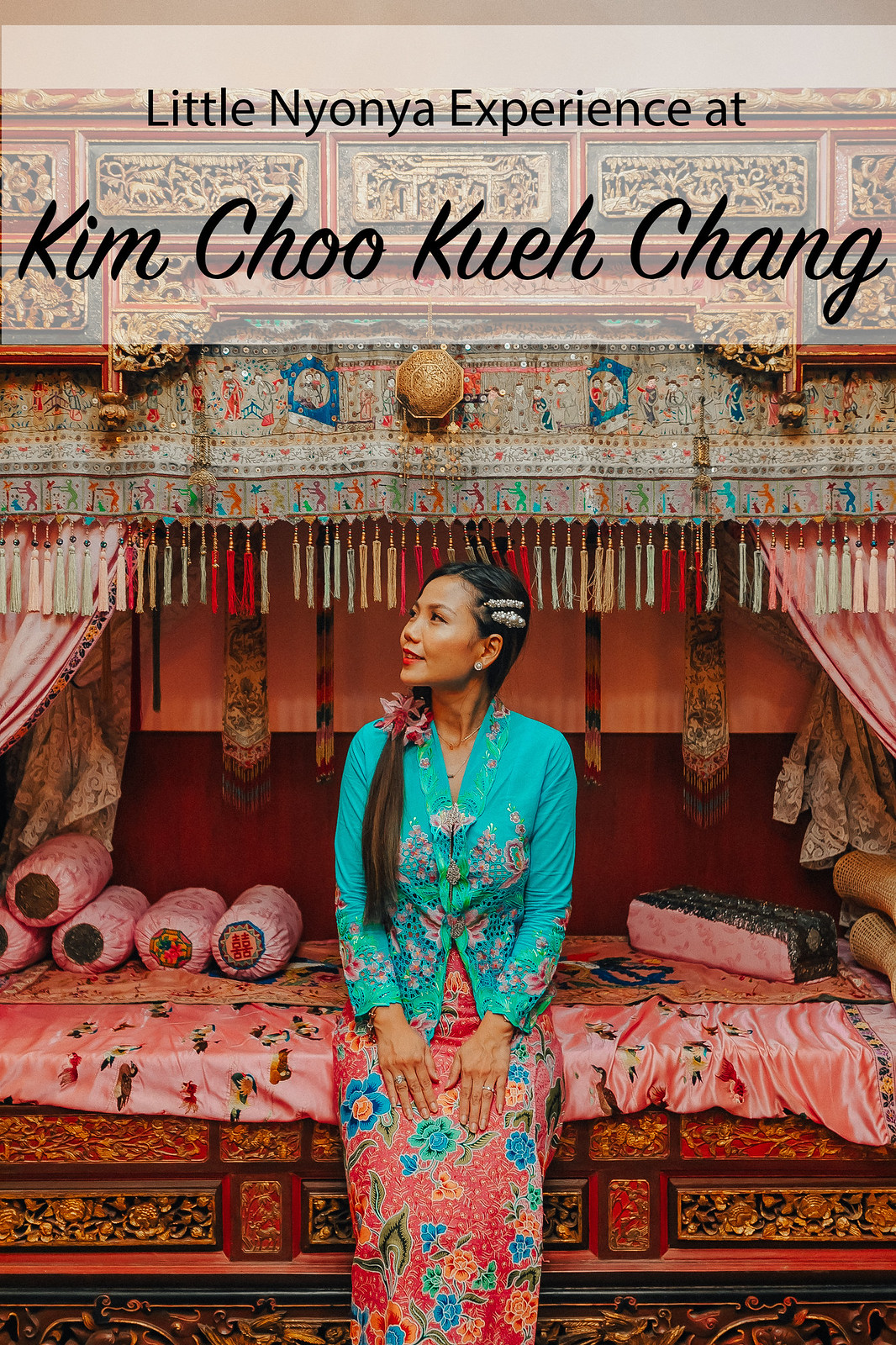 Playing Little Nyonya @kimchookuehchang awhile ago. I’ve always want to do this for the longest time and finally managed to visit this place. Exploring their Peranakan kebaya collection. It’s really beautiful and i really love intricate detail on every kebaya. ⁣

Everytime i wear the traditional costume even though is not my own country costume i feel so proud, i feel like blending in to the local culture. Similar like when i wear Ao Dai in Vietnam and Hanbok in Korea. Even locals were praising us for wearing their traditional costume. ⁣

Step into the upper gallery of the Rumah Kim Choo shophouse in East Coast Road. Greeting you by a sight that evokes the feel of an old Peranakan house, or “rumah” in Malay.

Rumah Kim Choo shophouse in East Coast Road, which is filled with antiques and family heirlooms. Ranging from a bridal bed to Nonya kebayas, and ceramic ware to wooden cabinets that marry Chinese and European styles. The Rumah Kim Choo shophouse in 109 and 111 East Coast Road has a heritage gallery upstairs. And they sells Peranakan collectibles as well as traditional food such as the family’s signature glutinous rice dumplings.

The building dates back to around 1928. The late matriarch Lee Kim Choo who started the Kim Choo Kueh Chang rice dumplings business in 1945

Raymond Wong, the grandson is kebaya designer in the house. If you are keen to find yourself a kebaya that best represents your personalities, you can visit the boutique gallery for a free fitting session. 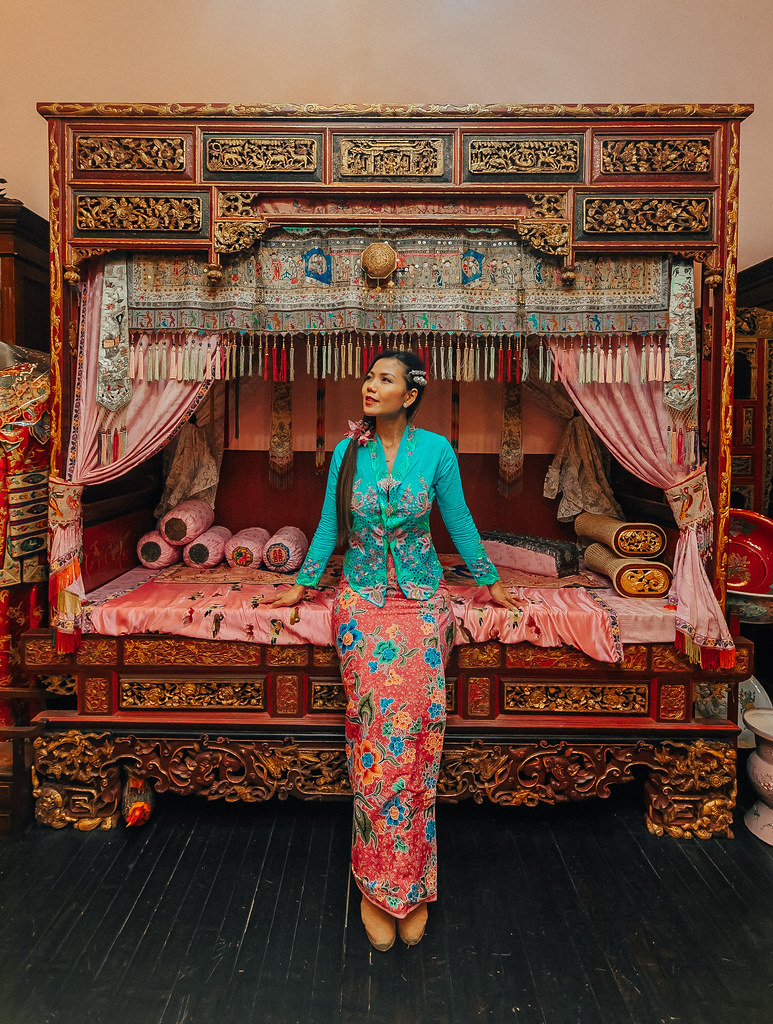 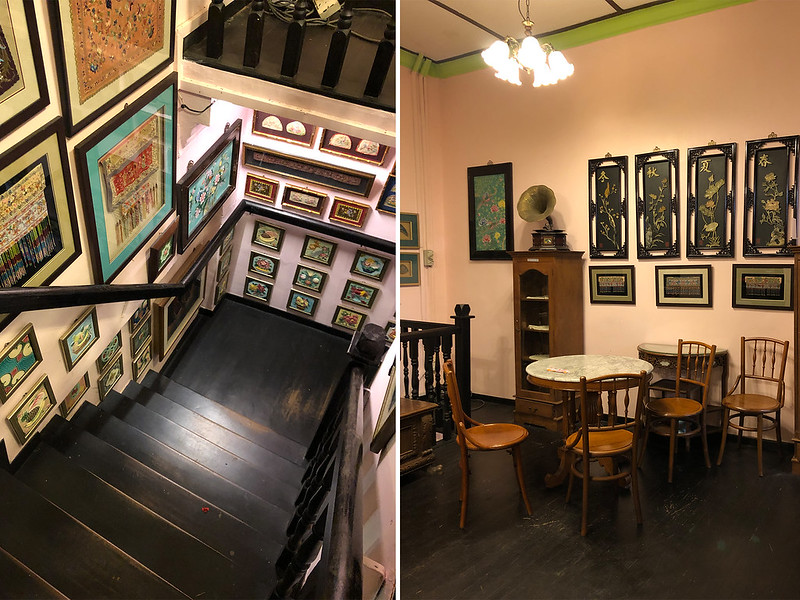 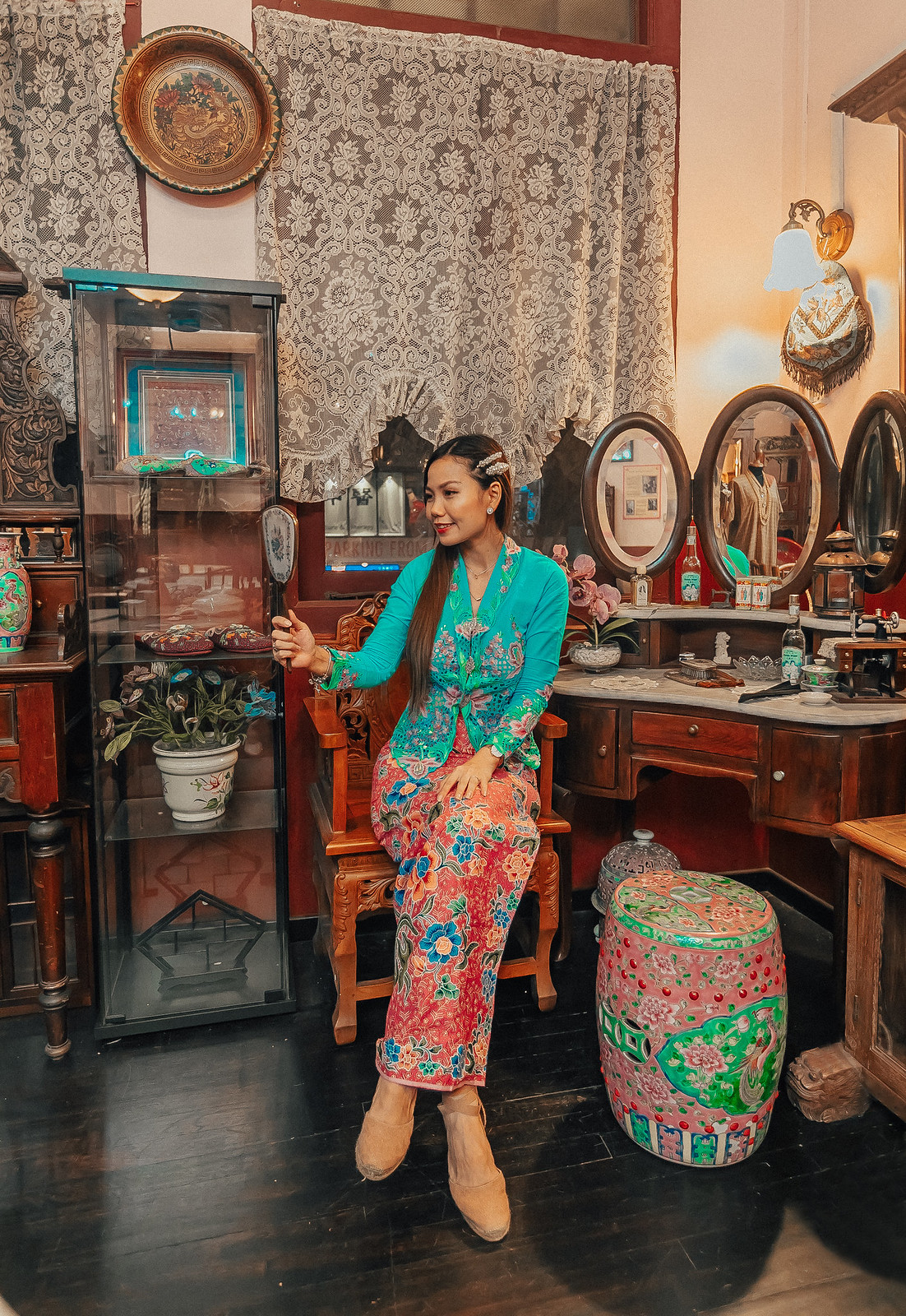 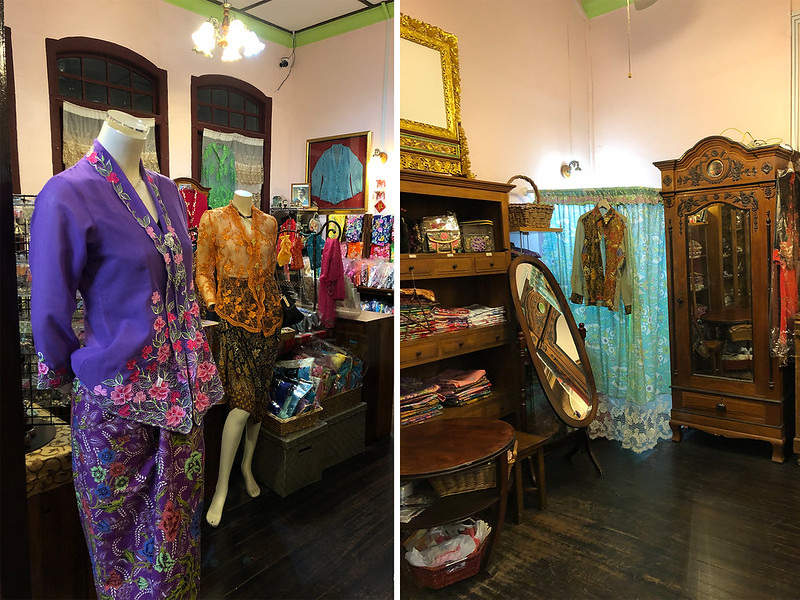 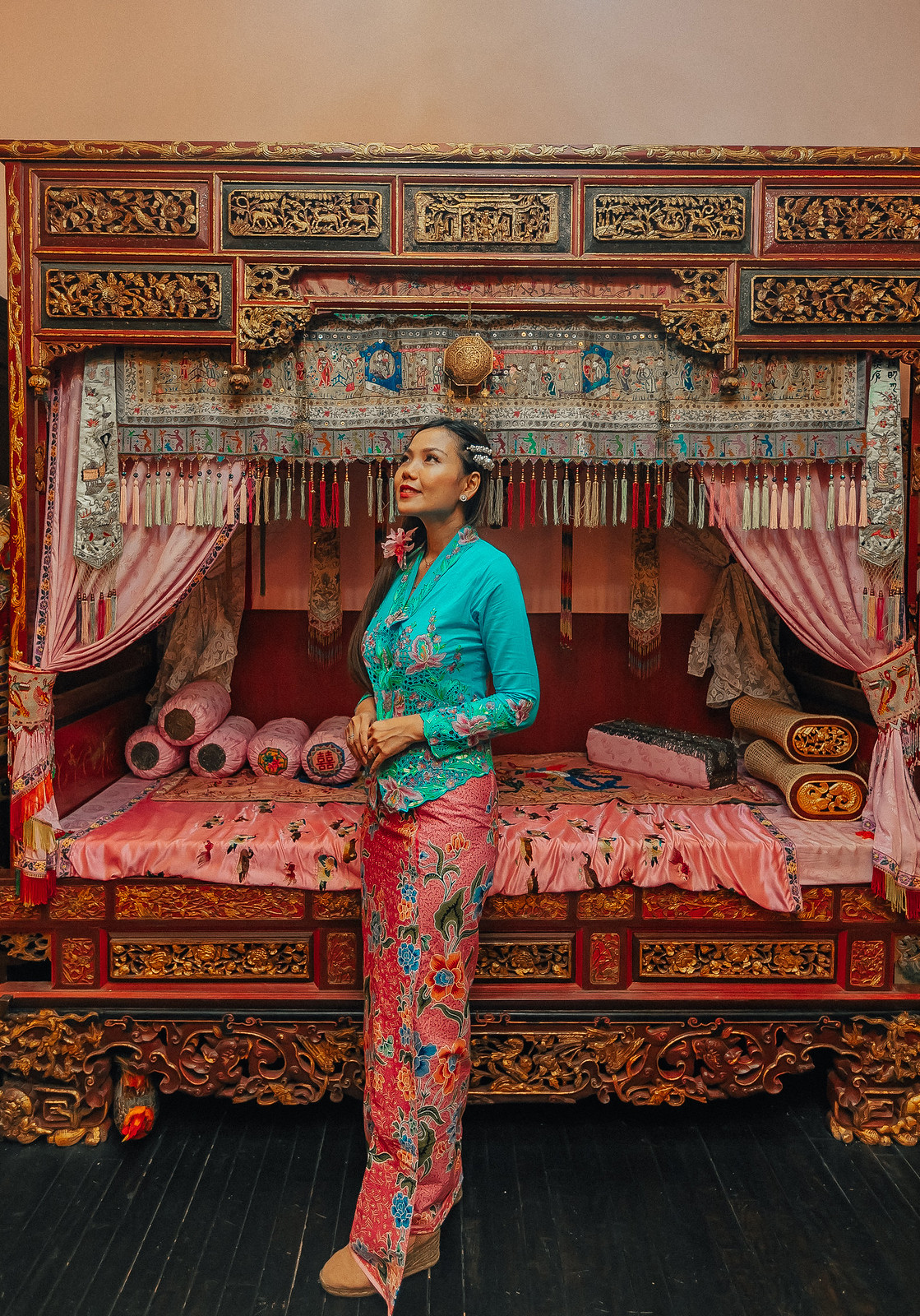 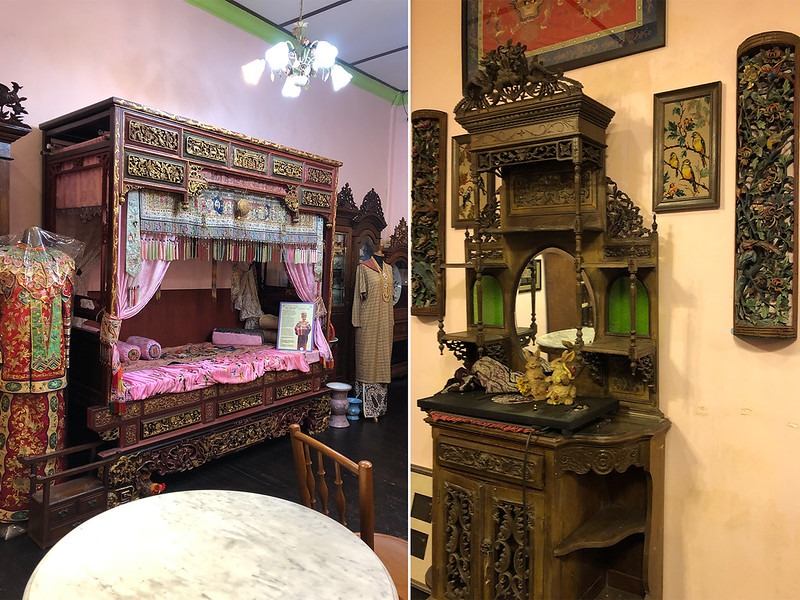 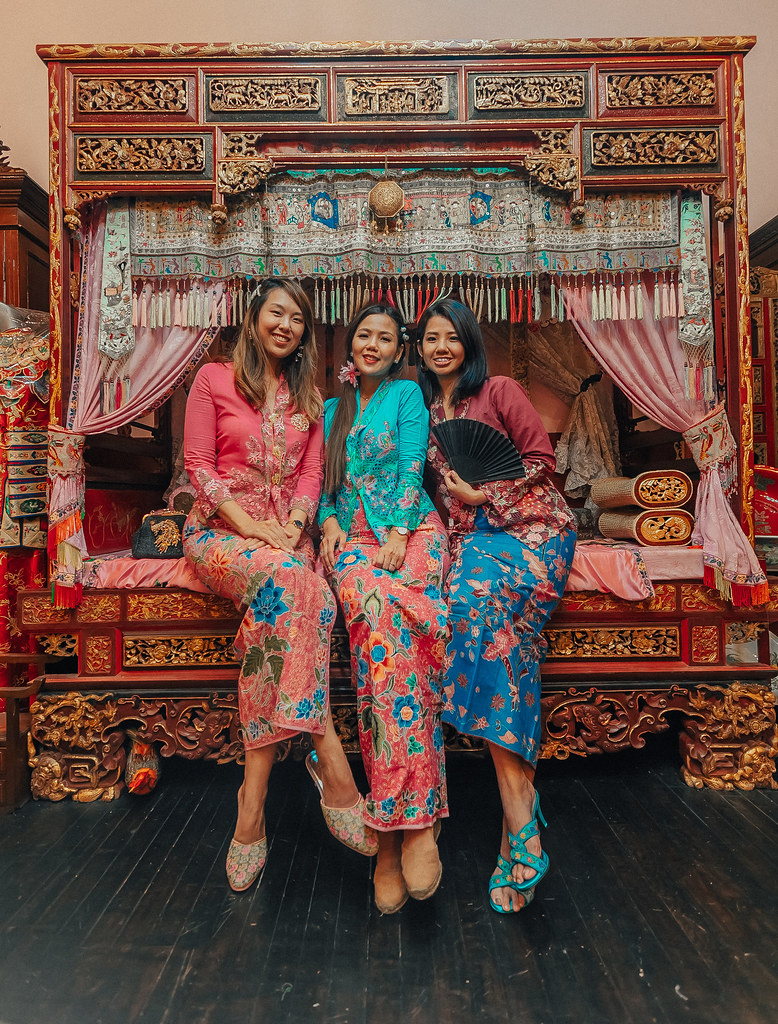 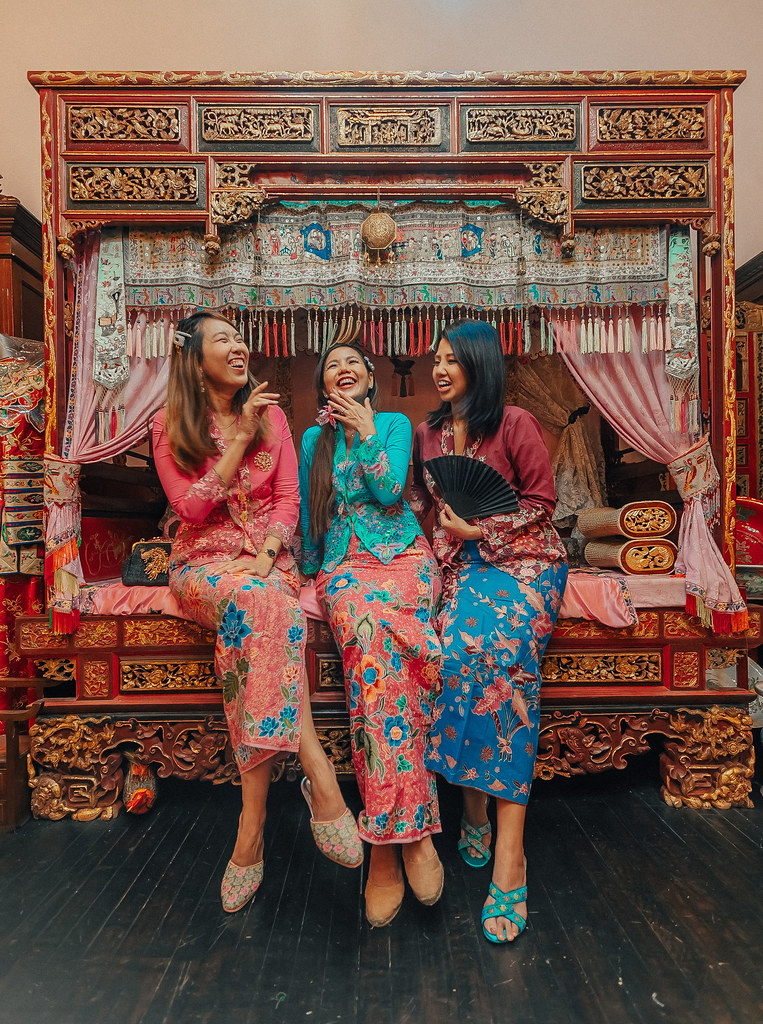 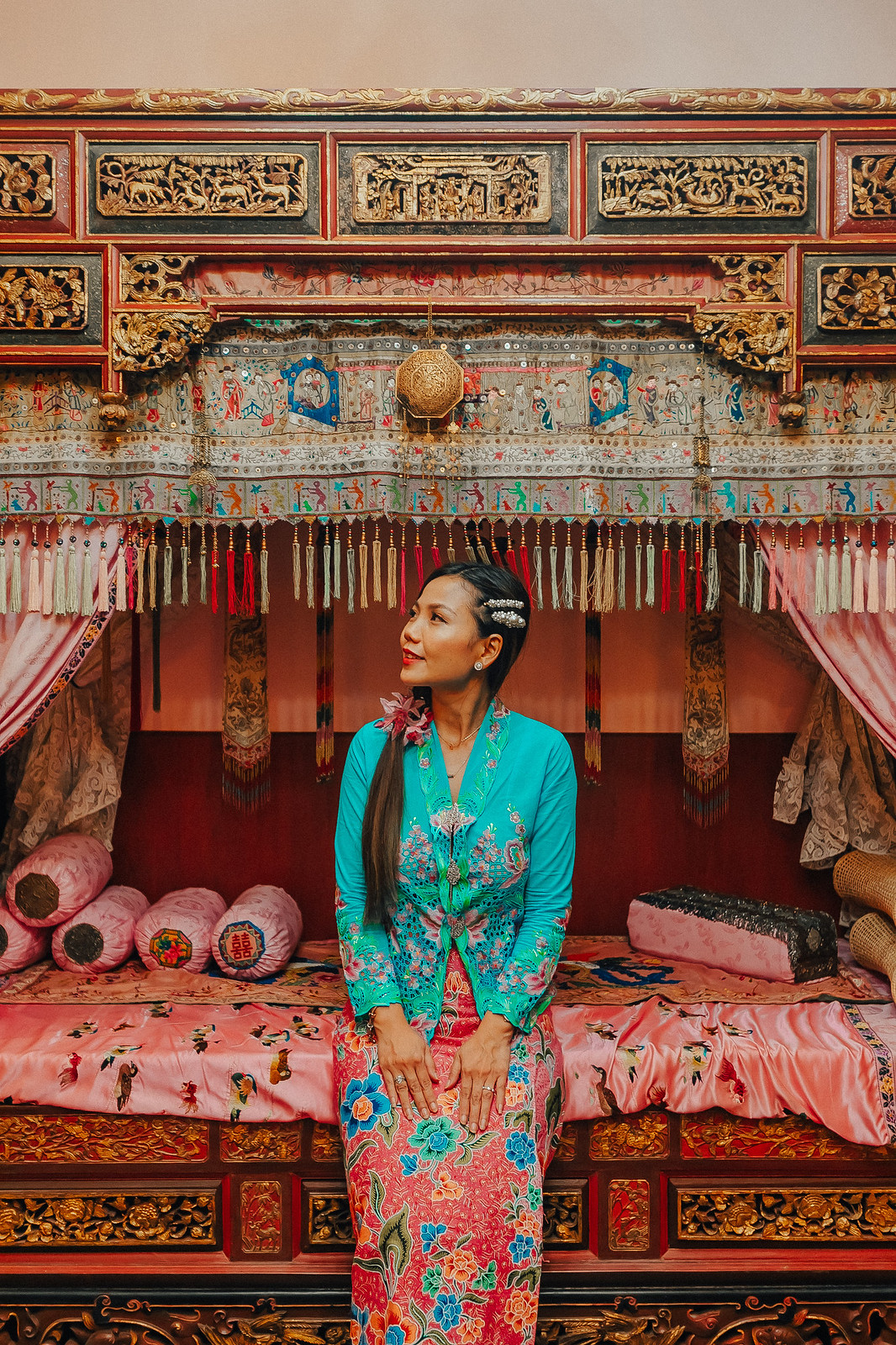 The term ‘Peranakan’ is commonly known as ‘local born’ or ‘local descendants’ and is thought to have been used by the local people of the Straits Settlement and Malay Archipelagos to address foreign immigrants whom established families and businesses in the Straits of Southeast Asia.

During the late nineteenth century, Chinese communities who settled in Southeast Asia adopted the term Peranakan to distinguish themselves from the new immigrants, whom they referred to as Sinkeh (new guest) or, in Indonesia, as totok (migrant). More specifically, male descendants were called Babas and female descendants Nyonyas while senior females were recognized as Bibiks. Most of these descendants, although retaining their Chinese beliefs, also adopted local indigenous lifestyles. Thus, giving birth to the unique practices of the Peranakans and even their own variation of the Malay language called Baba Malay.

Peranakan food is probably the most diverse and distinctive of all local cuisines. A marriage of cooking styles, Nyonya cuisines combine the preparation techniques of both traditional Chinese and Malay cooking. This unusual marriage gives Nyonya cuisine its distinctive taste, filled with exciting flavours from the use of local herbs and spices, and more often than not spicier and hotter than Chinese food.

A typical Nyonya kitchen would not be without condiments like turmeric, ginger, galangal shallots, chives and shrimp paste. They also using lemon, limes, tamarinds, green mangoes, citrus leaves and coconut milk to up the epicurean experience. Rempah is an exciting blend of ingredients pound together in a mortar and cooked in oil to release its flavour is used for a variety of dishes. It’s this special combination that sets Peranakan food apart from the rest. And because of their ingenuity to improvise traditional dishes with spices and herbs, Peranakans have produced tasty local treats like achar, curry fish in banana leaves, buah keluak, chendol, Nyonya kuehs and many other delights.

Last but not least, the Peranakan culture shares great nostalgia and significance to our local communities in Singapore, and is an attraction for many of our foreign visitors who wish to discover and experience the unique Southeast Asian culture.

Special thanks to @KimChooKuehChang for this kebaya fitting session., it was such an eye opening experience on the exploration journey to Peranakan culture in Singapore.
#KimChooKuehChang #Kebaya #exploreSingapore #VisitSingapore #Peranakan 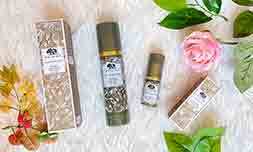 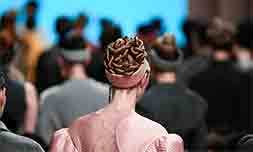 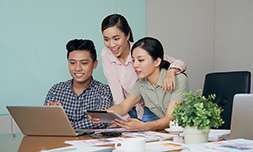