こんにちはみんなさん！Just in cased you’re new here, anime is one of the thing that I enjoy watching and sharing. As mentioned here, I can’t get through my day without watching anime and reading manga before I sleep! And also… I would be really happy if you can share the anime that you’re watching now with me too! Because sharing is caring, so let’s exchange!

END_OF_DOCUMENT_TOKEN_TO_BE_REPLACED

I always get snapchat questions such as “what anime is that?” but I posted too many animes and sometimes I don’t even know which one you guys are asking about, lol. So I think it will be better for me to list out the anime in this post.

Hope that you will love them as much as I do! Furthermore, if you remembered… Few years back, I used blog about what current anime am I watching but I stopped after awhile as I thought that nobody who read my blog is actually interested in anime as much as beauty stuffs. But after getting so many snapchat chat about it, I decided to write an entry again.

Anime play a big part in my life, I basically grow up watching them since I was really young. My mom used to record it down on tape and let me watch it after I finish my homework, the first few anime that I can remember is Sailormoon, Doraemon, Ranma 1/2 and Crayon Shin-Chan? My mom is still laughing at me for watching “cartoons” at my age but I don’t think that I will ever stop watching them even when I’m old. I think my happiest moment in life is probably lazing on sofa with junk food while I marathon anime. Don’t judge me by saying I got no life, this is my life lor. lol!

Alright, enough of the long chat. I will list out a few from the previous season and this season one. If you have any good recommendation, you know what to do la. Don’t be selfish and keep it to yourself. Share it with me, ok? Hees* 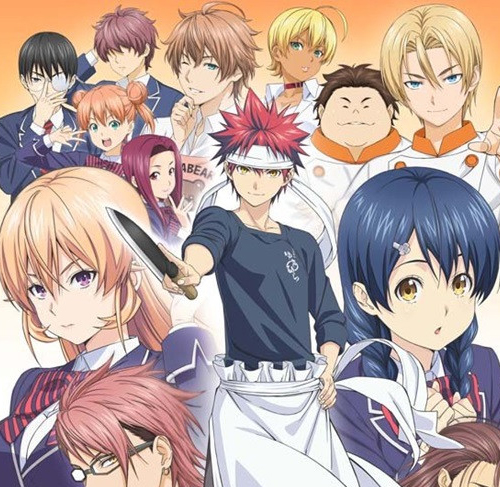 Yukihira Souma’s dream is to become a full-time chef in his father’s restaurant and surpass his father’s culinary skill. But just as Yukihira graduates from middle schools his father, Yukihira Jouichirou, closes down the restaurant to cook in Europe. Although downtrodden, Souma’s fighting spirit is rekindled by a challenge from Jouichirou which is to survive in an elite culinary school where only 10% of the students graduate. Can Souma survive? 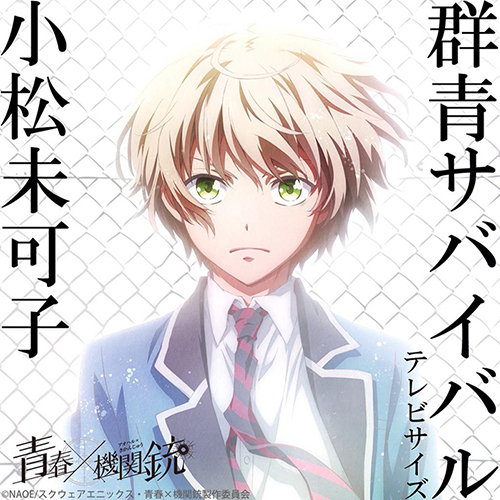 When Hotaru moves into a new apartment alone, there’s a mysterious man standing nearby the apartment. Hotaru decides to confront the man, who turns out to live in the neighboring apartment. The next day at school, Hotaru’s best friend Kanae tells Hotaru that a host tricked her out of her money. When Hotaru goes to confront the host, he happens to be none other than Hotaru’s neighbor, Masamune?! 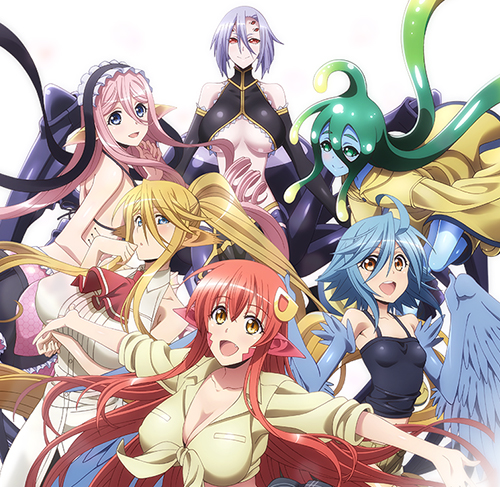 Monsters—they’re real, and they want to date us! Three years ago, the world learned that harpies, centaurs, catgirls, and all manners of fabulous creatures are not merely fiction; they are flesh and blood—not to mention scale, feather, horn, and fang. Thanks to the “Cultural Exchange Between Species Act,” these once-mythical creatures have assimilated into society, or at least, they’re trying.  When a hapless human named Kurusu Kimihito is inducted as a “volunteer” into the government exchange program, his world is turned upside down. A snake-like lamia named Miia comes to live with him, and it is Kurusu’s job to take care of her and make sure she integrates into his everyday life. Unfortunately for Kurusu, Miia is undeniably sexy, and the law against interspecies breeding is very strict. Even worse, when a ravishing centaur girl and a flirtatious harpy move in, what’s a full-blooded young man with raging hormones to do?! 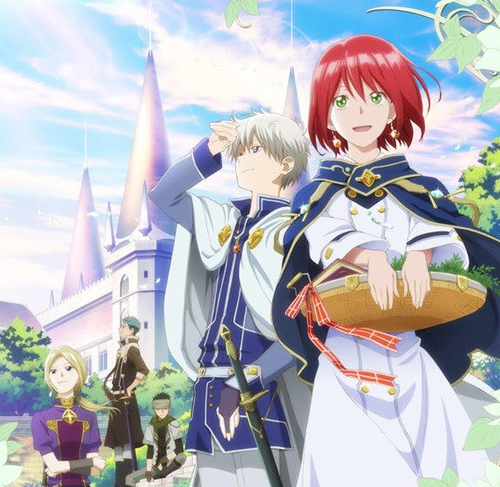 Shirayuki was a young girl born with unique apple-red hair. She meets a famous but foolish Prince Raji, who falls in love with her at first sight and orders her to become his concubine. With nowhere else to go, Shirayuki cuts her hair and escapes to a neighboring country. While traversing through the forests, she meets a young boy, Zen, who helps her after she boldly cures his wounds but then gets poisoned by an apple given to Shirayuki. Meanwhile, Prince Raji sends out henchmen to search for her. What will happen to Shirayuki? What is Zen’s true character? A refreshing fantasy story between an optimistic heroine and a prince who constantly stays on her watch. 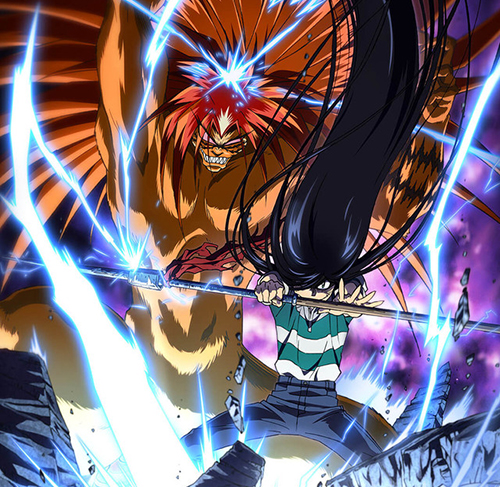 Ushio thinks that his father’s talk of an ancient ancestor impaling a demon on a temple altar stone with the legendary Beast Spear is nuts, but when he finds the monster in his own basement, Ushio has to take another look at the family legend! To save his friends and family from the invading spirits, Ushio is forced to release Tora from his captivity. But will the creature prove to be worse than the curse?

I was extremely happy when I found out that Ushio and Tora was remaked,
I swear that this is definitely one of the anime that is worth watching again. 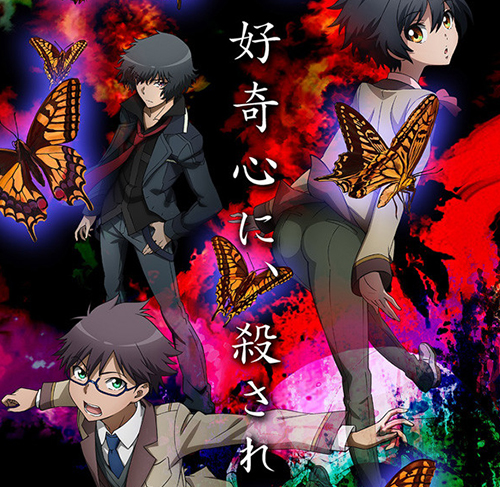 The story takes place at a certain middle school where several murder cases take place. Kobayashi, a boy who goes to this school, meets genius detective Akechi, who comes to the school to investigate. Kobayashi takes an interest in Akechi and, in spite of his friend Hashiba’s worries, he volunteers to be Akechi’s assistant. 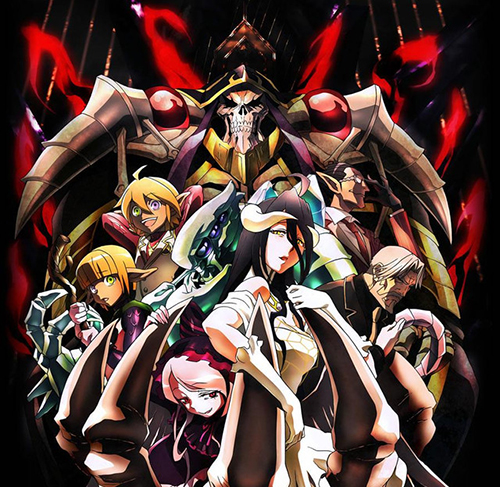 The story begins with Yggdrasil, a popular online game which is quietly shut down one day; however, the protagonist Momonga decides to not log out. Momonga is then transformed into the image of a skeleton as “the most powerful wizard.” The world continues to change, with non-player characters (NPCs) begining to feel emotion. Having no parents, friends, or place in society, this ordinary young man Momonga then strives to take over the new world the game has become. 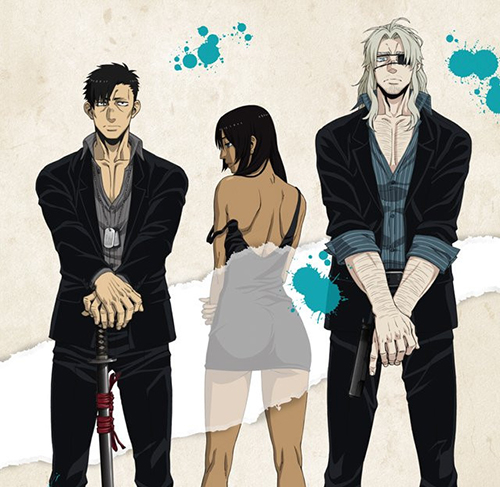 In the city of Ergastulum, a shady ville filled with made men and petty thieves, whores on the make and cops on the take, there are some deeds too dirty for even its jaded inhabitants to touch. Enter the “Handymen,” Nic and Worick, who take care of the jobs no one else will handle. Until the day when a cop they know on the force requests their help in taking down a new gang muscling in on the territory of a top Mafia family. It seems like business (and mayhem) as usual, but the Handymen are about to find that this job is a lot more than they bargained for. 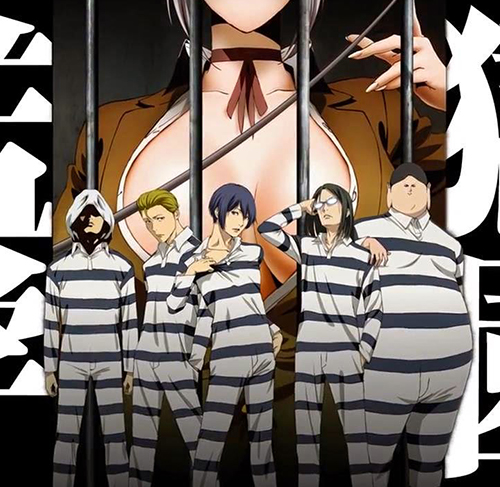 On the outskirts of Tokyo stands Hachimitsu Private Academy, a storied all-girls boarding school for elite young women full of potential and good breeding. But as the new school year rolls around, one tradition is going out the window: For the first time in the school’s long history, boys are being allowed to enroll. But on the first day of school, only five boys make the cut. Kiyoshi Fujino, one of the lucky few, is thrilled by this discovery, his heart leaping with joy at the thought of being surrounded by all those girls, day in and day out. But little does he know of the shocking fate that awaits him. 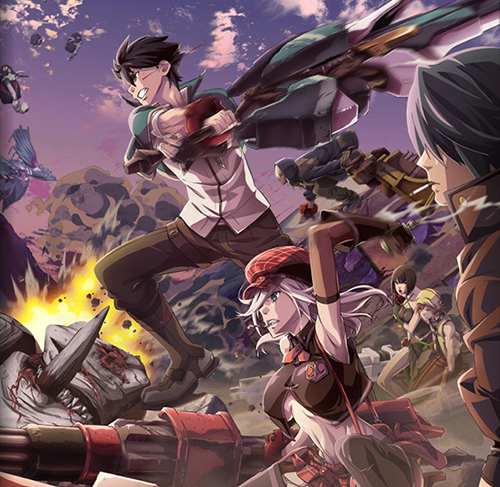 I got no idea why they stop producing new episode after the third ep, I read it online and some people are saying that they don’t have enough funds to continue the whole anime. Which I hope that it’s not true because this anime is kick ass and I honestly don’t want another trauma from a unfinished anime.

Somebody assure me now that everything is going to be fine! I need it badly! 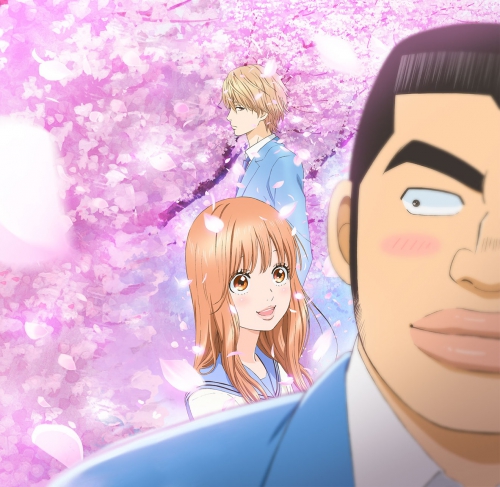 Gouda Takeo is a freshman in high school. (Both estimates) Weight: 120kg, Height: 2 meters. He spends his days peacefully with his super-popular-with-girls, yet insensitive childhood friend, Sunakawa. One morning, on the train to school, Takeo saves a girl, Yamato, from being molested by a pervert. Could this be the beginning of spring for Takeo? 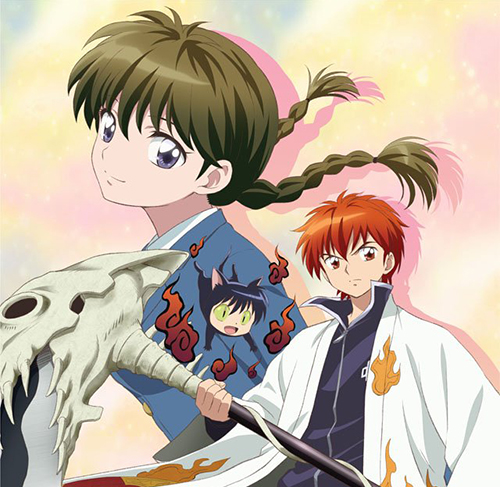 As a child Sakura Mamiya mysteriously disappeared in the woods behind her grandma’s home. She returned whole and healthy, but since then she has had the power to see ghosts. Now a teenager, she just wishes the ghosts would leave her alone! At school, the desk next to Sakura’s has been empty since the start of the school year, then one day her always-absent classmate shows up, and he’s far more than what he seems! 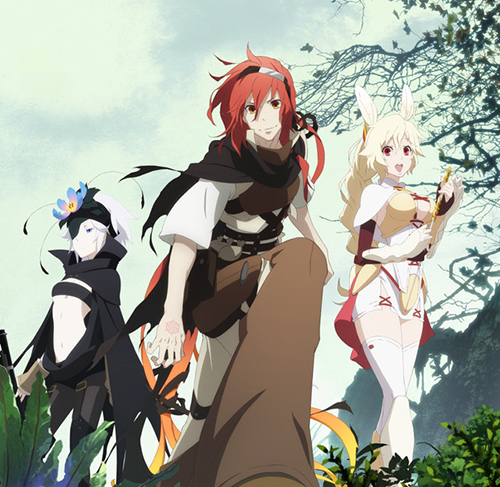 When the Majin awoke from the depths of darkness, the deity of fate chose six heroes and bequeathed them with the power to save the world. Adoretto, a boy who proclaims himself the strongest on Earth, has been selected among the Rokka no Yuusha (Heroes of the Six Flowers), and he goes to the rendezvous point — but seven have gathered there. The heroes suspect that someone among the seven is the enemy, and the initial suspicion falls on Adoretto. 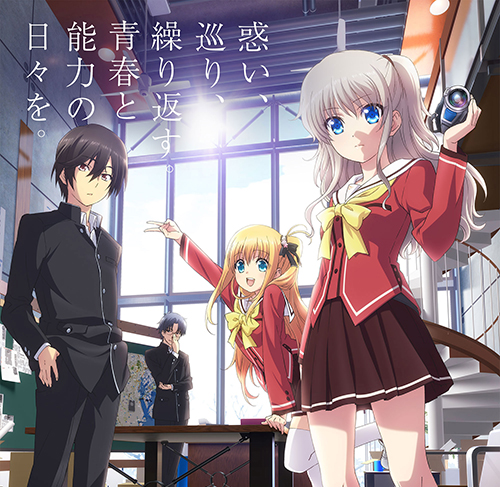 The story centers around the special abilities that occur among a small percentage of boys and girls in puberty. Yuu Otosaka uses his power without others knowing, and lives a fairly normal, average school life. Before him suddenly appears a girl, Nao Tomori. Due to his meeting with her, the fate of special power-users will be exposed. 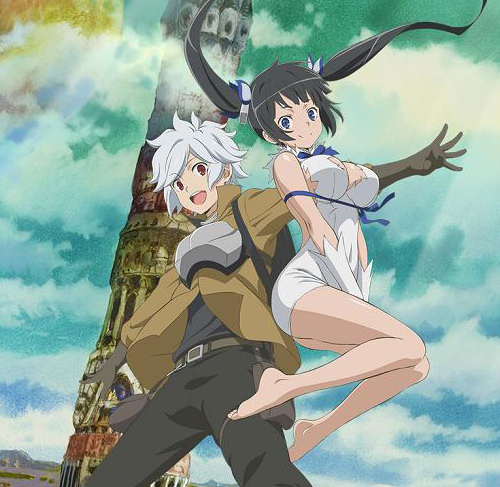 Commonly known as the “Dungeon,” the city of Orario possesses a huge labyrinth in the underground. Its strange name attracts excitement, illusions of honor, and hopes of romance with a pretty girl. In this city of dreams and desires, new adventurer Bell Cranel has his fateful encounter with the tiny Goddess Hestia.   Thus begins the story of a boy striving to become the best adventurer and a lonely goddess searching for followers both hoping to reach their goals and perhaps have some romance in the side. 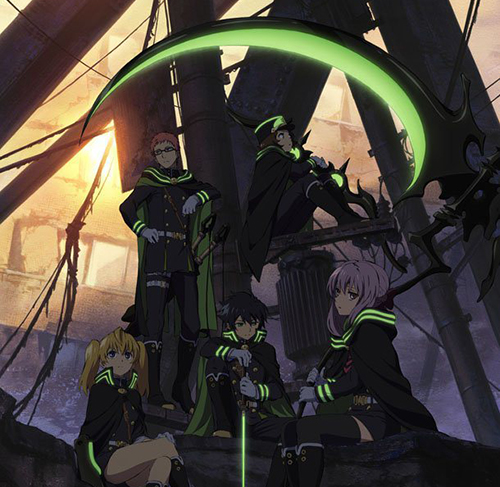 One day, a mysterious virus appeared on Earth which killed every infected human over the age of 13. At the same time, vampires emerged from the world’s dark recesses and enslaved mankind. Enter Hyakuya Yuuichirou, a young boy, who along with the rest of the children from his orphanage, are treated as livestock by the vampires. Even in captivity, Yuuichirou dreams big. He dreams of killing vampires. He dreams of killing them all.

Note: Let me know if I left out any anime that you’ve seen it on my snapchat yet I didn’t mention it here, also if there’s anything that you want me to blog about. Feel free to drop me a comment!