HARBIN 哈尔滨 – THINGS TO DO & SEE

Harbin (哈尔滨; Hā’ěrbīn) (pronounced as Ha-er-bin) is the capital of Heilongjiang Province and the northern most major city in China. The city has strong influences from neighbouring Russian, which during the 1917 Russian Revolution, many of the Russians fled to Harbin to avoid the newly form Soviet Union. Till date these influences is evident in their architecture and cuisine.

Harbin is known for its notoriously cold winters with temperatures as low as −38°C being recorded. When I was there right after Christmas, the temperatures dropped a lower than the average  −20°C to about  −26°C. This is the first time that I have experienced such low temperatures and I survived without dropping a ear or nose!

For anyone traveling to such harsh winter destinations, you can read up about the proper layering in this post here. (link will be up soon!)

Mandarin is widely used and the people around hardly know a word of English. So do get your Google translate ready on hand if you do not speak Mandarin.

Walking around in the cold might not be the most comfortable of activities and in the times when I was in Harbin, most of the time taxi was the main mode of transpiration.  Taxi fares are inexpensive and a convenient mode of transport. When hopping onto a taxi, always politely request the driver to turn the meter on, in Mandarin it is 请打表, pronounced as Qing Da Biao.

For very short rides, less than 3km, I came across a number of drivers who will just tell you a flat rate of RMB 10. This is just slightly above the metered price of RMB 8 for less than 3km and I’ll just go with that offered rate.

In the event that you have problems hailing a taxi in the cold or are unable to converse in Mandarin, you can also download the Chuxing Didi app (For iPhone click here & For Android click here) which is China’s equivalent of Uber. The app allows English input of addresses which eliminates the language barriers.

Harbin is renowned for the yearly Harbin Ice & Snow Festival and it is an attraction not to be missed. The Harbin Ice & Snow Festival is unique to Harbin as all the sculptures are made from the blocks of ice from the frozen Songhua river. More than 10, 000 people were engaged for the preparation of the event. With its towering sculptures of more than 45 meters high and its huge scale, it is one of the world’s biggest snow sculpture festivals in the world.

Harbin Ice & Snow Festival is opened from December through February. The exact date in February is not set yet as it depends very much on how the temperatures warm up as this affects the sculptures. Once the temperatures get higher and the sculptures start melting, it would be dangerous to continue with the festival as it might lead to unstable sculptures. Global warming has led to the opening duration of the Harbin Ice & Snow Festival to be increasingly shorter in recent years.

There are a couple of eateries that have set up shop within the compounds of the Ice & Snow Festival and it is packed with people who want to get a warm drink, warm food or simply get away from the cold.

The temperatures within the compounds of the Harbin Ice & Snow Festival dips lower than the actual weather forecast as being surrounded by so much ice chills the area even further. When you head there, it is recommended to pile on as much thick clothings and pants that you have so that you can keep warm enough to walk through and enjoy all the sculptures. As the whole place was covered in snow, the soles of my feet started feeling cold and icy towards the end of the 2 hours I was there and I would suggest that you have a few heat packs on you, including one for the soles of the feet.

I really enjoyed the displays in the Ice & Snow Festival as they are pretty and magnificent in scale. It made me feel like I was in another world where buildings were lit up with such beautiful colours. With a rather pricey entrance fee of RMB300 (about SG$62), I would still recommend you to visit this place as there is no where in the world that feels quite like this. Magically colourful and bitterly cold.

To enjoy your experience there, you have to be very well clothed and I found heat packs in pockets, gloves and in your soles to be really helpful to keeping more comfortable against the cold.

The entrance fee of RMB110 allows you to visit the park in two ways. First, we got on a bus which brought us into the park’s gated compounds which separated the tigers according to their ages and hunting characters. These big cats were freely roaming and they would curiously walk up towards the slow moving bus and I could see them in such close range separated by the glass windows.

The driver would ask if any one would like to see the tigers feeding on live animals and for a fee, you could purchase a live animal, from a small chicken to a full size goat, to witness the chase of these powerful animals. I managed to witness a live chicken being released and saw how fast these cats pounced on this new prey. For tigers, when they get their preys, they consume on their own and will not share it with the rest of the pack.

After the bus tour, we alighted at the bridge walkabout section where we could see the Siberian Tigers from a caged bridge. There is also opportunity for feeding of the tigers with strips of meat dangled with a tong through the cage.

The Siberian Tiger Park gives me a little of a mixed feeling as some the tigers are kept in smaller individual enclosures and the staffs mentioned that they will be kept in there for the rest of their lives due to behavioral issues and the inability to coexist with the other tigers peacefully. But that said, the rest of the tiger population look really healthy and comfortable in the bigger gated enclosures and with a yearly good number of cubs being born, the Siberian Tiger Park must be doing something right.

It takes about 2 hours to complete the visit in Siberian Tiger Park. If you have time to spare, you can also catch the circus performance where you can watch tigers perform in the rink.

Opening Hours: 8am to 4pm during winter

With Russia as neighbour and their historical ties, Harbin City has many Russian architectural & cultural influences that is visible everywhere. These buildings give the city a old world charm that is romantically alive once the sun sets and the places are lit by dreamy incandescent lights. The mood is set along with the chilly cold nights when you walk along the streets with an ice cream in hand that never melts.

The iconic Russian Orthodox church is one such place to experience the magnificent Russian design and architecture of Saint Sophia Church built in 1907. The church was built by the early Russian settlers after the completion of the Trans-Siberian Railway. The church is now a museum for the historical collection of photos of Harbin City.

You can take the opportunity to have a taste of Russian cuisine at the many eateries around the vicinity of Saint Sophia Church.

Along the famous shopping area, Central Street,  a long pedestrian shopping street where you can shop for gifts and souvenirs, grab some street snacks and taste the famous MaDieer popsicle.

Northern China is famous for dumplings and the locals consume dumplings like how the rest of China consumes rice. By some chance, or rather I crossed the traffic light from my apartment and ran straight into the first restaurant that I saw,  I walked into Dong Fang Jiao Zi Wang.

There were a lot of options of dumpling fillings and the one that is unique to Harbin is the sour vegetables and pork dumpling. It provides a refreshing taste from the tinge of sourness so that it doesn’t feel too heavy on the palate.  I would also recommend the one with prawn and pork filling which brought out the sweetness of the prawns against the savoury pork.

I would highly recommend that you try this unique Northeastern Chinese dish known as Tie Guo Dun- 铁锅顿。 Cooked in a huge pot over a stove, the ingredients of this stew are poured into the deep metal pot and allowed to simmer to a boil.

The serving size is good for 4-5 persons and it is served with a side of vermicelli that you can put into the stew towards the end of the session for it to absorb the rich and delicious flavours of the stew. You can also add on pan cake like bread pieces, known as 饼 which literally means biscuits, to dip into the stew.

Candied Hawthorne, 冰糖葫芦, has expanded its repertoire to offer more than just Hawthorne. These candied fruit skewers are coated with malt that hardens to a crunchy exterior in the cold temperatures. It is a quick and cheap street snack that is readily found along the streets. 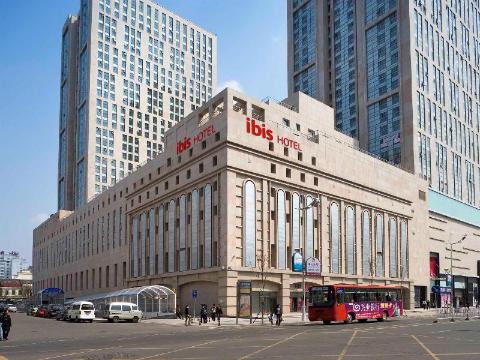 Ibis Harbin was my first choice accommodation for the trip for its affordability and convenient location. Located a street away from Central Street and walking distance to many of the attractions like Saint Sophia Church and Zhaolin Park, Ibis Harbin is definitely popular with travelers to Harbin garnering very good ratings.

Conveniently located on Zhongyang Street, the shopping area of Harbin City, Harbin Jingu is another highly rated hotel. Their spacious and comfortable looking rooms are also rated highly in terms of cleanliness. 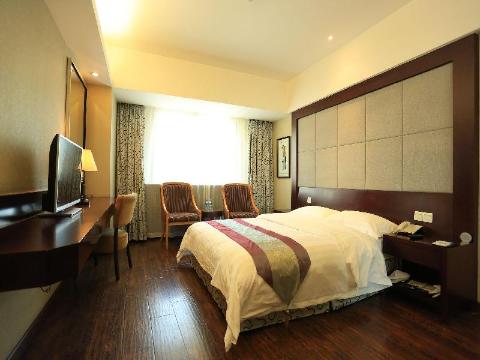 Harbin is infamous for its harsh winter and it is really important to be well prepared for temperatures of -15 to -25 degrees. The blend of history with Russia gives Harbin a character unique to this city and adds another level of dimension and character. With direct flights from Singapore to Harbin via Scoot, this could be very well your next winter wonderland! 😉