Hey guys! I never thought I’ll be able to post a photo of myself like this—with ZERO make-up on and taken by a DSLR (entire face in HD). I’ve always been insecure about my complexion because of the frequent outbreaks and highly uneven skin tone. Hahaha don’t believe me? Here’s a picture that I found 10 weeks ago.

You can see how uneven my skin is and the patches of acne on my cheeks and forehead. I was wearing full make-up and with edited lighting to try to reduce the details on my face. But no matter how much you try to conceal, you can’t cover up bumps and unevenness.

From when I was a kid, I never believed in skincare because I was ‘young’ and I thought only older people needed it. However, I didn’t know proper skincare should start from when you’re young because it’s easier to prevent skin problems than to cure. I never used toners or even moisturisers for my face.

The problem for me became more prominent after my ‘A’ levels last December, when I started to model; I had to put on full make-up almost everyday for long hours during shoots. At that time, I lacked the knowledge and resources to get proper skincare. It started to take a toll on my skin. I had acne breakouts almost all the time, especially on my forehead and cheeks.

Here are other pics I look in the last 5-6 weeks, I also had full make-up on and you can see the pimples and blemishes. They’re considered really bad because the photos were taken from so far away unlike selfies, which are taken from an arms-length away.

I would say my uneven skin-tone is caused my the long hours I used to spend in the sun because of soccer practice 6 times a week. I tan REALLY easily while un-tanning takes months. This causes my face to seem like it has light and dark patches as my tan fades unevenly. My skin also got really dry and pigmented (yes THIS early) from the sun. Fine line were even starting to appear under my eyes from the lack of moisture.

I’ve never had the funds or the opportunity to get introduced to the wonders of facials. The only other time I went to one was to NewYork skin solutions, but it was for that complimentary one-time facial every citizen is entitled to *cough spam texts cough*. They just cleared my surface pimples and acne, which is only a short-term solution. Recently when I found out about HAACH®. I finally had some hope for saving my poor face.

I went down to the HAACH® two weeks back to get an Oxygeneo treatment. Oxygeneo is a machine that exfoliates and oxidizes the skin, it claims to be able to do a shitload of wonders for the face. This is a list of additional things it does as compared to the traditional facial machine called Microdermabrasion:

I was there to try out the machine for myself to see if it really worked.

I arrived at M Hotel on a rainy weekday with Keith, who was so sweet to accompany me there ♥ The staff were really friendly and asked us if the air-con was too cold and if we were comfortable. While I filled up the mandatory forms, they provided both of us with hot freshly brewed tea. The place was superbly furnished and smelt really good! I felt really relaxed the moment we stepped in.

HAACH made their spa and treatment room superrrrrrrr soothing, there was calming music playing and lavender aroma therapy! There were two beds so I’m guessing they have twin packages if you wanna go for facials with a friend.
I couldn’t take pictures for most of the time because Keith wasn’t allowed in plus I was too busy enjoying the facial heehee. But I’ll just highlight what went on during the sesh.
I was feeling pretty tense because I didn’t know what to expect (sorry noob over here), so the lady doing the facial for me waved scented oil over my face and gave me a short massage, which relaxed my muscles pretty good. After that we proceeded with the Oxygeneo facial. She applied a layer of treatment gel over my face with a brush before using the machine.

There was quite a tingling and rather spicy feeling on my face during the facial but the lady explained that it was perfectly normal. After that, I found out that when the want of the machine comes into contact with the gel, carbon dioxide bubbles start to form, causing oxygen-packed blood to move to the skin’s surface for a plump and radiant complexion, hence causing the sensation.

This is what the machine was actually doing:

I thought my face would look red after the 20 minutes but when I looked into the mirror, my skin was super glowy and smooth!! I couldn’t stop touching my face because I’ve never felt my skin so dewy before HAHAHA.

I couldn’t tell if my face had more collagen or better cell production but for the rest of the claims they had for outer appearance, they really made it happen!
It was also safe for my super sensitive skin.
Afterwards, she put a mask on my face for around 30 minutes (just an estimation because I fell asleep hehe) to open up my pores before removing my blackheads, whiteheads and pimples with a pimple extractor.
She also trimmed my brows and ended off the session with a SUPER SHIOK neck, back and shoulder massage.

When I changed back into my clothes and came out, there was another nice warm cup of tea waiting for me at the counter. I really felt like royalty the whole time sia, I wish my everyday life would be like that.
I was really impressed on how much difference just one session can make! I felt like I had just went for a hot spring session, my face felt so clean and fresh!! I had no make-up at all; the photos were taken in awesome lighting, taken with a DSLR and were NOT EDITED AT ALL.
For y’all who don’t use a DSLR and think that my face still looks like shit, go borrow one and take a selfie and take a good look at it. Because every small microscopic flaw (I’m exaggerating but seriously) will be amplified x10000 on a DSLR.
Anyway, I gotta thank HAACH® for educating me on skincare and letting me try out their new oxidising technology, Oxygeneo. Can’t wait to go back and update you guys again on my progress!
Also, just for my readers, I have a discount code for you guys!! 🙂 The cost of the Oxygeneo treatment (and to be treated like absolute royalty ;)) was $580 but is only $48 when you text
Check out more on their website
http://www.haach.com
The address for the outlet I was at:
M Hotel
81 Anson Rd
Level 11
S 079908
T (65) 6223 5885 Do I Still Need Sunscreen Now That I'm Always at Home? 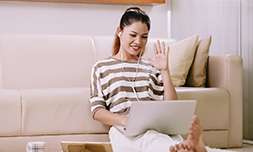 The Do's and Don'ts of Video Conferencing Stuck at Home? Here are 10 Ways to Beat the Cabin Fever Travel Bags and Accessories to Get for Your Man