we took budget: Tiger airways
So there was 5 of us so we decided to AIRBNB after our wonderful experience @ BKK!
The area we stayed was at Ao Nang 🙂

Super pretty pink scooter!!
We wanted to rent 3 bikes but there were 3 of us who don’t know how to.. tried to learn but failed terribly (oops).
I kept thinking back on Lombok and wished I had learnt it then 🙁

In the end we decided to rent a car, which was the BEST DECISION EVER!! Even though of course it’s much more expensive. But worth it!! Because we went during monsoon season and it rained everyday T_T
Headed for lunch after we settled everything, finally!

Then we headed to the supermarket and did some grocery shopping!
We also decided to go to the Tiger Cave.. where we didn’t know that there was a crazy amount of steps to climb to reach the ‘mountain top’..
when we arrived it started to pour so we seek shelter and saw super cute dogs and pups!!!

Climbing up 2,764 steps??? It was tiring!! and scary at times because some steps are super steep!! Gosh…

The struggle was real HAHA

After the cave, we headed back to our house and Zu cooked us dinner!!!

So colourful and delish!
On the 2nd day, we headed for White Water Rafting! Which was initially scary.. But so fun!!! Major adrenaline rush, hahaha
It was pouring non stop the entire day so we rafted in the rain, making it more thrilling than evaaaa~
We reached late so we started the ‘journey’ at mid. But it was OK coz they said that the first two sections were mild so doesn’t really matter that we missed it.

No ahyin coz she was the one taking our photos!
It was really very exciting and I couldn’t stop screaming. It was so cold too and we got splashed water so damn many times!

We bought the “package” where buffet lunch was provided, yay! We were relatively hungry because first meal of the day!

the omelette was so shiookkkkk
Headed back to our house after everything, it was an approximately 90 mins drive back!
Washed up and rested!!
And Zu cooked again (our left over ingredients from the day before!)

And corn too!
It was raining so we just stayed at the house until evening and headed to Ao Nang Centre point… had dinner then went drinking at Crystal Bar!

Alcohol is super cheap in Thailand!!!!! 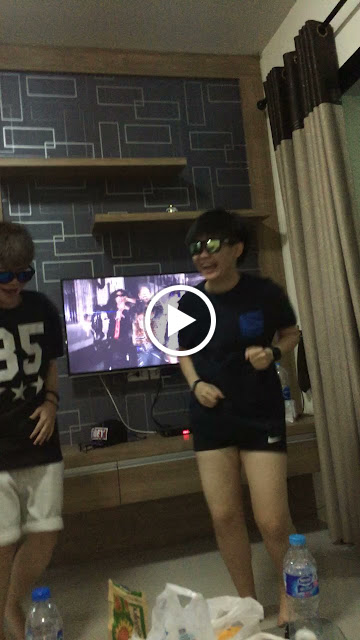 To be continued !!! 😉
Continue Reading